Accepting a Counteroffer Affects your Jobs

You have a great job. You love it. You make good money and can’t imagine leaving. But what if the perfect opportunity presented itself to further your career, move closer to family, and make even more money? Would you consider leaving? Of course you would! You accept the job, but then your current company makes a counteroffer. Now what? Here at Kimmel & Associates, we feel the best service we can offer our candidates is to ensure they are fully informed about counteroffers, how to handle them, and what the negatives of accepting one entail.

Recently I had the opportunity to speak with a hiring authority at one of our clients, where we have made several placements over the last 10 years, regarding an employee that did accept a counteroffer. The employee turned in their notice, and our client decided to extend a counteroffer to keep them on board. This counteroffer amounted to tens of thousands of dollars and the employee flip-flopped and decided to accept the counteroffer and remain with their current outfit. We constantly talk about how detrimental counteroffers are to people. I really wanted to hear the perspective from our client and see if, and how, the employee’s decision would truly affect their job. And now I’m going to share our conversation with you.

Real Talk About Accepting a Counteroffer

“Well, this person is great at what they do. So, yeah, they’re worth that money.”

“So what’s going to happen to this person? Is there a target on their back now?”

“No. There’s no target on their back. It’s just business.”

“Okay, but is there anything negative that could come out of this for them?”

“Well… I’ll tell you one thing. If this person ever comes through here again and says they’re leaving, I’ll say, ‘don’t let the door hit you on the way out.'”

That’s it. They’re out. No discussion. No nothing. Our client would never give this person more money. They would not even entertain talking to them into staying on, again. Interesting.

So, I continued. “What about down the line? What else might happen?”

“Well, I’ll also tell you that the next time a promotion comes up, and this person may be a good fit for it, they’re not getting it. They’re at a certain level in the company, they’re very talented, but if there is a role higher up that I think would be fitting for them, that they would be a viable candidate for, they won’t be considered for it.”

A Target on Your Back?

So, as much as we preach that accepting a counteroffer is the worst thing you could ever do and that it puts a target on your back, it’s true.

“Accepting a counteroffer is the worst thing you could ever do.”

And even though this client said, “No, there’s not a target on his back,” there really is. What we say about counteroffers really does happen. 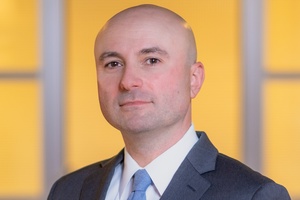 Billy began his career at Kimmel & Associates in 2004 as a Recruiter. After successfully developing strong relationships with some of the nation’s leading talent in this market, Billy was named an Associate in the Heavy Civil Division in 2007. He was promoted again to Vice President in 2019 in recognition of his outstanding work.