Tunnels represent civilization, progress, innovation, and extraordinary human achievement. But they’re taken for granted. In the field of construction, few types of civil projects require such high levels of thought and energy as tunnel building. Tunnels are masterpieces of engineering, and tunnel building projects appeal to big thinkers.

In both cost and schedule, tunnel building logistics vary radically from project to project. Major tunnel projects from the 20th century illustrate the point. For instance, the 33-mile Seikan railway tunnel in Japan took 24 years to complete and cost $7 billion, whereas the 13-mile Chesapeake Bay Bridge-Tunnel took 3.5 years and cost $200 million.

To a greater degree than skyscrapers, tunnel building demands customization. No set of tunnel plans is repeatable due to soil, rock, and water conditions. Location and environmental challenges dictate decision-making. Tunnels generally are conduits for moving water, sewage, traffic, people, and data. Based on usage and conditions, no two are built alike.

For skilled workers in construction who are intrigued by natural challenges, high-impact construction, and long-term legacies, tunnel building is a perfect match.

The Challenges of Building Tunnels

In terms of complexity, a tunnel project’s challenges begin on day one. Preparations for building a tunnel are involved and intricate. First, an intense, detailed assessment of soil properties must first be conducted. This can determine how a tunnel will be excavated and built. Core samples from rock and soil are gathered and analyzed until satisfactory evidence is available to decide excavation approaches and tunnel trajectory. Building tunnels in water requires an entirely different set of criteria.

Inside a Clock Tunnel

One outlandishly unique project going up in the Sierra Diablo mountain range of Texas combines tunnel building and innovation. Rather than people or traffic, the moving parts planned for the main tunnel are the clock mechanisms and pendulum for The 10,000 Year Clock.

A clock? In a tunnel? Yes, two tunnels, in fact. A vertical tunnel to house the 300-ft. clock, and a horizontal tunnel at the base for people to access the clock. The project is the brainchild of American inventor Danny Hillis of LA and is moving forward with a $42 million donation from the founder of Amazon.com, Jeff Bezos, who has also provided the land for the project on his property in remote west Texas.

At the beginning of his involvement in the project, Bezos launched a minimalistic website briefly describing the clock project, including details about its tunnels.

The vertical tunnel will be the home for the solar-powered clock, hopefully for ten millennia or longer, hence its name, The 10,000 Year Clock. The clock is one of several projects undertaken by the Long Now Foundation, a think-tank that works to foster long-term thinking for the betterment of humanity. The idea is to inspire people to think in terms of the long view, versus the now or immediate future. In this way, current problems are approached with a different mindset and short-sightedness in decision-making takes a backseat. Such big ideas, like pyramids, and even tunnels, force civilizations to work and reflect on larger goals.

Bezos writes on his website about excavating the vertical clock tunnel in 2011 by using a technique called raised boring:
Quote: “Instead of drilling down from the top, you pull a large diameter reamer up to the surface from the bottom using a smaller diameter pilot hole – more efficient than a top-down drill because the rubble isn’t fighting gravity. It rains down beneath the advancing bore and gets hauled out a horizontal shaft at the bottom.”

A video of the Raise Bore Milestone shows the drill in action. The 500-ft. shaft took ten days to drill. A smaller shaft was drilled first, from top to bottom, and then the larger 12.5-ft. diameter drill head was pulled up. Get another sneak peak of the tunnel from this video interview with Stewart Brand of the Long Now Foundation.

The Long Now Foundation shows the Power and Winder testing in this video. 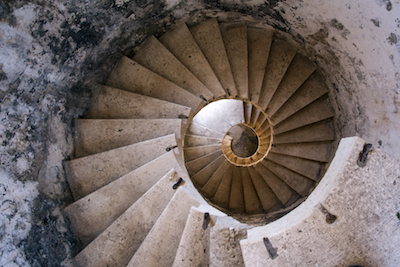 The clock project has attracted much publicity for many inventor types.

A company in the Pacific Northwest, Seattle Solstice, was asked to create a solution to construct the vertical tunnel staircase, so that people could visit the clock. Think spiral stairs, such as New York’s Museum of Modern Art (MOMA), except without the white walls. Seattle Solstice master stonecutter Stuart Kendall, an ingenious inventor, built a new machine to carve out the steps in the vertical tunnel from the top down.

Cobbled together from ideas and parts over the course of his thirty-some years in stone-cutting and inventing, the new machine, called the Robotic Diamond Saw, looks like the blade of a chainsaw laid sideways on a robotic arm. Except the size of the chainsaw is magnified 100 times.

The clock in the mountain may be the most unique tunnel project in the world.

“It’s very much like a ship in the bottle,” says one former engineer on the project. “The clock, once it’s all built, you would be literally hard pressed to get it back out of there. It had to be thought through.”

The clock itself is an exercise in design mechanics. Made of titanium parts (so they won’t rust over the millennia) and powered by the sun (based on exacting calibrations), it aspires to be maintenance free.

“The parts that are being made are really sculptural quality,” the engineer says. “What I’m proud of in my industry is just how creative and talented and technically strong so many of the people are, and how these problems get solved. Opportunities get found and started and implemented. It’s really fantastic how powerful that is.”

Secrecy surrounds the project because of many proprietary issues. The engineer, who signed a non-disclosure agreement for the job, says it was probably the most inspirational project he’s ever worked on.

No completion date is set for the clock, but visitors will be allowed to see it, albeit after an extreme, half-day hike, trekking up to the horizontal tunnel entrance, braving razor-sharp cacti and rattlesnakes. Guests must bring their own source of light to go up the vertical tunnel. A second clock is proposed for Nevada, but construction hasn’t begun.

If you’re a skilled construction workers intrigued by natural challenges and long-term legacies, then tunnel building may be a perfect match for you. And who knows…maybe, just maybe, you could work on the Nevada tunnel and clock project one day.

Do you have a favorite tunnel? Share in the comments below!