End The Blame Game at your Workplace

In every work environment there comes a time when mistakes are made. These blunders range from simple typos in emails to wrong information being sent out to a client, or worse, confidential information being sent out to the wrong client. Regardless of the magnitude of the error, even the best employees can end up rattled and flustered. In such a state, our mind goes into over-drive trying to come up with the most logical explanation. Thus begins the unhealthy blame game. Unhealthy practices at work can affect our productivity. It’s important to understand why this happens so you can prevent the blame game from affecting your productivity at work.

Part of human nature is to look for plausible external causes for our predicaments. I recently came across an employee who was let go on the grounds of displaying rude behaviour to colleagues and exhibiting insubordination to management. However, while leaving the premises for the final time, the employee could be heard telling anyone who would listen, that his termination was a carefully executed plan from the higher management to save money. He was blaming someone else.

The practice of playing the blame game is also evident in the political arena. In order to justify their failings, governments often place the blame on other organizations. Whereas political parties and organizations pinpoint all major mishaps on the government in order to get a better rating in the public eye. They both continue pointing fingers at the other party.

So, why do people get caught up in this blame game phenomenon? Recent experimental research carried out by Larissa Tiedens, from the Stanford Graduate School of Business, demonstrates that the blame game is, in fact, a very transmissible practice, much similar to a viral infection. Findings in the Journal of Experimental Social Psychology indicate that in order to preserve our self-image and self-esteem, we look for the nearest scapegoat to pile responsibility on, washing ourselves clean of any responsibility.

It may even be considered as one of human nature’s survival modes. We employ this as a coping strategy in which our defensive mechanism actively works to reduce feelings of guilt, shame or failure which can be detrimental to our mental well-being. So it’s not that uncommon to see people at work engage in the blame game as a defensive and fearful stance to preserve their job security.

The Art of Peace, Not War 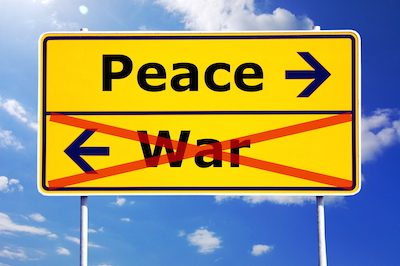 If you see your employees participating in a blame game hash-up, go a step further and put an end to it before it gets out of control. As a leader, you need to put down your foot and halt its progress. According to Nathanael Fast, a researcher and associate professor at the University of Southern California’s Marshall School of Business, blame games “inculcate a culture of distress that is the beginning of an avalanche of negative consequences.” You can easily avoid the disaster by adopting the following four strategies.

People sometimes play the blame game because they observe it at work. Bad examples are just as easy to follow as good examples. So it is imperative that good examples be set. I once sat in a client meeting and observed the wrong files being presented. It caused a major problem and was a hassle to the manager. Instead of coming down hard on his team, the manager organized a team meeting in which he highlighted the incidence and outlined the severity of the situation. He set forth his expectation of standards for future team performance. His team ended up feeling remorse at the mistake. They ensured they would meet their manager’s expectations for the future. He set a good example of not blaming another team, or the copy machine, or what have you.

Nathanael Fast believes that people that who take ownership of their mistakes are in fact psychologically secure individuals. It is the duty of management to ensure that their employees feel an appropriate degree of psychological security in their positions to be able to accept their mistakes and move forward. When you take responsibility for your own actions and own up to your mistakes, you’ll be able to trample the blame game before it tramples you.

Considering the findings that people begin the blame game as a natural part of preserving their self-image, the management should ensure that their teams have a positive and healthy self-image and have the capacity to accept their errors without causing detrimental harm to their self-esteem. In 1943, Abraham Maslow proposed, in his hierarchy of needs, that self-esteem is the fourth most important need to an individual. The most common way to show an employee that they are valued is through the use of rewards and praises.

Giving out “employee of the month” awards, highlighting their performance in team meetings, appreciating the efforts they put in every day, are the basic ways of making employee’s feel important. Other long-term and effective techniques include:

Stop the blame game by changing your focus. Insoo Kim Berg, founder of the Solution-Focused Therapy, suggests focusing on solutions, rather than problems. Individuals will move toward positive results through actions that fix the problem without focusing on it. So, don’t try to figure out who made the mistake or berate one another for causing the problem. Work together to find plausible solutions that will help you reach your goals. So, instead of crying over spilt milk, be quick about grabbing a cloth to wipe up the mess. Now you can pour yourself another glass and enjoy things being done the right way.

Group cohesiveness is strongly related to individual performance in an organization. If employees strongly feel that they are part of a group, then they will be more reluctant to point fingers in the blame game. They will own their part in the mistake. Effective managers not only encourage team unity, but also assign goals and tasks that make team members interdependent and reliant on each other. Rather than developing unhealthy competition amongst each other, they focus on putting their best effort towards the final product. An important point to note, however, is that individual efforts should also be highlighted through group efforts to maintain employee motivation.

Your Happily Ever After

Using these four tips to eliminate the blame game at work, you can peacefully envision your very own happily ever after. Put your own unique spin on these ideas and try to integrate them in a way that mirrors your organization’s mission statement. Getting rid of the guilt promotes a happy and healthy workspace. An office free from pointing fingers and placing blame on others is evidence that you no longer allow the blame game at your work.